I have always been interested in storytelling although my professional career rarely gave me the opportunity to put in practice my knowledge. During my researches, I notably attended psychological anthropology lessons at the Pierre Mendes France University of Grenoble (FRANCE).

Wikipedia defines the psychological anthropology as "an interdisciplinary subfield of anthropology that studies the interaction of cultural and mental processes. This subfield tends to focus on ways in which humans' development and enculturation within a particular cultural group shape processes of human cognition, emotion, perception, motivation and mental health."

In other words, the psychological anthropology analyzes the mechanisms of the collective unconscious and tries to define the approach of each culture regarding a wide range of themes. Thus, I am convinced that this field can be used in video games to better anticipate the player reactions and to encourage the emergence of specific feelings.

A matter of images

An image never dies out: it remains latent as any unconscious mechanism. Although collections generally end in storage rooms and photographs fade, the collector always keeps the natural image deep down within himself. It can rise again while facing a similar relic, even several decades later.

These two characteristics actively participate in the development of the collective unconscious while applied to a larger and deeper scale. It is notably due to the propagation and the assimilation since the early childhood of tales, proverbs, religious teaching and any cultural elements over centuries.

This is how tales - like Little Red Riding Hood or Three Little Pigs - have matched wolves to the archetype of the predator in the Western culture. Yet, wolves only attack the man at extremely rare occasions. It is even venerated as protectors in other cultures, such as Japan.

Contrary to the example here-above, most of civilizations share the same images - especially in ancient ones where religions hold a primordial position. There are the collective images that we should take in consideration.

The theme of "monsters" is shared by almost all the civilizations. The classical definition refers to hybrid creatures stuck between two worlds. Here some examples from the Western culture:

Classical monsters are repulsive, hostile, primal (in contrast with the modern society), have several arms, sticky tentacles, large glassy eyes… They are frightening - especially for children who have many nightmares until 6 years old. Thus, nightmares are an important part of the cerebral maturation process. It allows children to exteriorize the anxiety they can’t express by other means. The fact that most of the monsters are anthropomorphic - i.e. look like humans - greatly participates in this process by binding children’s anxiety to themselves.

Using monsters in video games is an excellent way to create an immediate challenge: players naturally face it as a defensive reaction, in the same way monsters can startle them or create a disturbing atmosphere like in the Silent Hill series. However, this mechanic only works in the short term: facing monsters becomes a routine and the game tension considerably decreases once a player has overcome their fear. Moreover, the player unconscious matches the monsters to the player anxiety and defeating it generates a satisfaction / a relief. The best example that comes to my mind is Doom 3 which gradually becomes a classical FPS as the player can easily guess where next enemies will spawn - breaking the surprise effect and psychologically getting him ready for the fight.

Let's now study the modern definition of the term - i.e. the image nowadays people have. You can see below a street interview carried out in 2005 by the social studies department of the Pierre Mendes France University. The question asked was: "What do you consider as monstrous?". 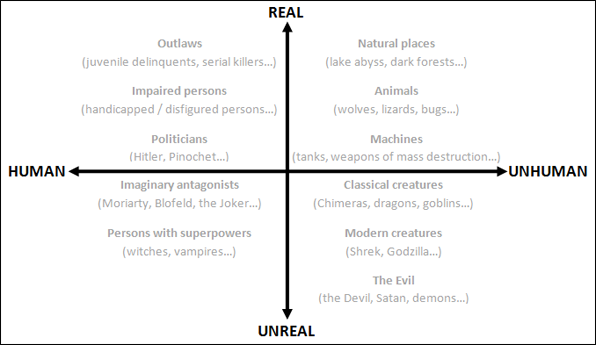 The people who were questioned often answer "Outlaws" (Human / Real) which includes all kinds of criminals from juvenile delinquents to serial killers. Serial killers are always described by media and victims’ families as "monsters", "aliens" or "predators". People don’t choose these words randomly. Indeed, binding the image of monsters to barbaric criminals is a perfect way to differentiate ourselves from something we can't understand, and at the same time to define our own identity: "they are monsters, we are not like them". For further information about this process, see the Valladolid debate or the trial scene in Planet of the Apes if you prefer sci-fi.

The Last Of Us is an excellent example to both support this differentiation process and to show that classical and modern monsters can work together in a same story.

The two protagonists - Joel and Ellie - mainly encounter Infected during the first hours of the game. The Infected get more and more monstrous to keep the player under pressure: Runners, Stalkers, Clickers and then Bloaters. The story gradually focuses on the relations between survivors. The more it progresses, the more the opponents look like Joel who is himself “a brutal survivor having lost everything he valued in life and with few moral lines left to cross”. The game then takes a darker turn, fuzzing the difference between humans and monsters and making the player wondering what he would do in situations like that.

The story finally reaches its climax during the Chapter 9 “Lakeside Resort” when Ellie meets a group of survivors leaded by a character named David - Joel is supposed to be dead at this moment. It turns out that David and his group are terrifying cannibals. The soldiers and the raiders that Joel and Ellie previously met were acting as groups without any leader or personality. At the contrary, the player gets intimate with David when Ellie fights beside him and shares her fire camp. He so becomes more than a simple opponent and embodies the perfect archetype of the shadow as Joseph Campbell described it - i.e. the darkest side of the protagonist pushed to the extreme. As such, David also acts as a catalyst: by facing him, the player faces the whole group of cannibals, absolves Joel’s past behavior and confirms that he is still “human”. This is - in my humble opinion - the best part of the game.

To summarize, classical monsters are a perfect way to create an immediate challenge: they are frightening, hostile and the player naturally fights it as a defensive reaction and as a part of an unconscious process. At the contrary, humans embody better villains and have a deeper impact on the player if they are correctly introduced and own genuine identities. Sure, humans are individually less frightening than classical monsters but they are real, they refer to the cruelty of the daily life, the fear to get involved in such events and force the player to face their own dark side.

I hope you enjoyed the read.
Here some related books: